The northeastern region occupies the largest land area in Thailand, with more than 170,000 square kilometers in size or roughly one-third of the country as shown in Fig.1. It is made up of 20 provinces. The region is commonly referred to as I-san or E-san, which usually conjures up the image of an arid land area. The soil is mostly sandy, with substantial salt deposits. Most of the agricultural areas are rain-fed and lack of irrigation facilities. The economy of the region relies on the agricultural products such as rice, sugarcane, and cassava. Rainfall is unpredictable, but is concentrated in the rainy season from May to October. People in this region still confront problems of droughts and floods every year. In the dry season, people in some areas of the Northeastern scarcely have water to drink or to use due to insufficiency of water storage. At the same time, in the rainy season, people in some areas specifically those who live in the flood plain are affected by floods. In addition, the augmentation of population, the expansion of urban communities, the growing number of industries, the changes of land use, the climate changes, all of these affect the environment, resulting in pollution in mainland, in water, and in the air. 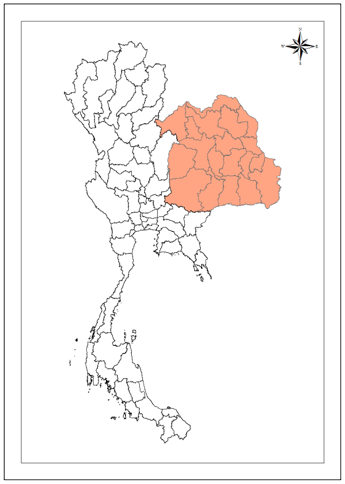